Feeling interesting.  It’s funny because the lastest song is entitled “Another Man’s Dream” and it’s about moving out from under the shadow of my Dad, Larry and the people in the church who hurt me those years ago…

It’s kind of a statement/manifesto of self.

Once recording and promotion is done for table for one. there are the new projects already on tap.  Not the least of which will be a non-holiday Balderdash & Humbug collaboration.
The other Myke Hutchings works are going to be recorded and released as they happen to me.  The joys of not being tied to a project or CD release, and the realization that I don’t need to hit the studio unless I have something big, allows me to make on the fly and produce regularly.
Next step is refining what happened August 28th into something more concise and a little less traumatic for me and the audience.  Then taking the show on the road (albeit without four damned guitars) – I’ve heard that people elsewhere are interested and I’m more than willing to play house concerts or events if expenses can be covered.
I think my nervous breakdown in December 2014 was a good thing in hindsight.  I get that working as a sideman for another musician meant I would have only ever been the sideman and potentially another songwriting collaborator versus staring down the barrel of finally recording table for one. as an artist in my own right.  Again, evidence I can no longer live someone else’s dream.
A tough lesson to be taught and in all honestly a fucking brutal way to learn it.
At the same time, the band members have been fully supportive of me since, despite my letting them down.
I am constantly reminded how lucky I am to be surrounded by people who believe in me, even when I don’t believe in myself.
You all are blessings in my life. I am truly grateful for your patience, kindness and support.

Today, it’s as if a massive weight has been lifted my shoulders.  I sit here writing this with my heart filled with peace, love and a sense of victory.

Last night, in front of 95 friends, I performed the contents of my new album in its entirety from beginning to end.

I then followed it up with a set of cover songs that have been instrumental in my recovery from the deaths of my husband and my father and the resulting PTSD and anxiety.

This also marks the first time in almost seven years that I have performed as a solo act.  I haven’t been on a stage beyond with the Hamilton Gay Men’s Chorus since the last house concert I did in Durham, North Carolina that long ago.

This is big for me and I doubt I could have managed this last year or even two years ago.

The evening was painful for me both physically (my hands are trashed from playing the guitar for two and a half hours straight) and emotionally.

See two of the songs of table for one. were written using quotes from Larry’s journals as he processed his illness and impending death.  I literally sang my deceased husband’s words in celebration of his life and his acceptance of his passing in front of our friends.

I left my heart on that stage, in addition to the pool of sweat and tears (as seen here, compliments of Paul Hawkins). 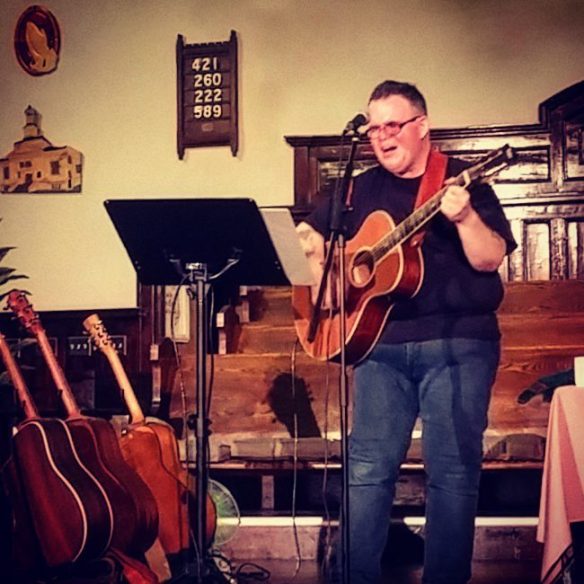 Yup, that’s an ugly cry indeed, in front of people, while singing.

And I wouldn’t have it any other way – because it’s real and what I was feeling.  Seven years ago, I would have been embarrassed to do this in front of anybody, let alone an audience of people who paid twenty dollars each to see me.

But it’s done, people were happy and I am satisfied.  Songs that I was unsure of, I know work well and were received well.  Other songs fell flat and need tweaking before they get recorded.  But I’m going to take some time away from the material – about a week or so – and then revisit it with fresh eyes and fingers in slightly better shape.

But it was a great evening – I now feel this chapter in my life has concluded – recording the project and releasing it will be a great postlude to the period of recovery and rebirth.

Iain Bennett said it most succinctly to me last night when he whispered in my ear “Welcome back.”

Welcome back Myke, it’s been a while!  What took you so fucking long?

I’m sitting once again in my dining room, writing this by the glow of my laptop screen and the candles that I have lit throughout the lower level of the house.  Three years ago I was worried about so many things  in my life:

It’s now three years down the road and guess what?  I’m still pondering many of the same concerns:

So what does all this mean?  I know that I can stand on my own as an individual and can blaze my own trail.  I am blessed with a strong foundation of family and friends who keep me grounded, balanced and honest with myself.

Am I still frightened?  Nope.  Confused?  Kind of.  Concerned?  Sure.  Excited?  Definitely!

Watch here for big things in the near future…it’s going to be an interesting journey – table for one. is just the start – I can promise you that.